In my journeys with cameras, I’ve worked almost exclusively in black and white, enjoying the affinity I have for the shades and grays—and for film. As digital cameras started to become more available, I stopped shooting. Though I now have a digital SLR and find it to be utilitarian, it’s just not the same kind of creative tool. It feels wrong in my hand, not like my heavy-metal Minoltas, and I haven’t yet been intrigued enough to just pick it up and go exploring. Was I done with photography? the thought crossed my mind. But that changed when a dream became reality.

The dream merchant is one of my mentors—clearing out storage space, he came across his father’s cameras. Three of them, all well-used and in good working order, if hardly mint. They weren’t really worth the effort to sell on eBay, but more than that, he was reluctant to let them go to a stranger or to distant family, indifferent to the history and the possibilities. Somewhat tentatively, he asked if I might be interested… I could hardly speak! Perhaps he thought I’d just be polite about it rather than passionate, and okay, not to mention a little apprehensive, going from 35mm to really big!

So the cameras and accoutrements—cable releases, darkcloth, boxes of film holders, dusty lensboards, battered cases—came to me. The day he passed the torch and delivered the dream was—and I mean this—one of the happiest I’ve ever known. The connection to what and who was there before me was palpable. It’s an entirely different feeling from taking a new camera out of a shrink-wrapped box.

I listened to all the explanations and stories about everything, especially the previous owner. Born into a well-to-do family in Chicago in 1917, he was ostracized when he married a Jewish girl and eventually moved to California. Before that move, he’d worked his way through college as a migrant farm worker, booked swing bands at high school and college dances, loved to hang out at the “Black and Tan” clubs of St. Louis and Chicago.

Described to me as a natty (great word!) dresser and a true eccentric, he spent a lifetime annoying his family by indulging his passions for wooden sailboats and wooden cameras. Preferring to eat at diners and coffee shops where every waitress seemed to know him, he loved to act like a tough guy but could hang with the fine art literati with equal comfort. There’s a side of me that relates to that lifestyle. This photographer’s family was overwhelmed when more than 200 former students, clients and friends attended his memorial service in 1991.

With the cameras, I find I’m certainly interested in the 4×5, strangely drawn to the 5×7… but let me tell you, I cradled that 8×10 in my arms, bonding with it like a child, reveling in the tactile connections. And I cried, mostly from excitement. I’m still trying to create space (all senses of the word) in my life! in my garage! to go exploring. I’ll get there. 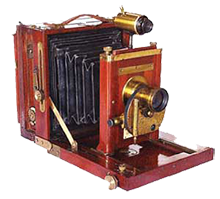 Meanwhile, this D2 camera has been described as more of a workhorse than a work of art, but the idea of camera-as-tool rather than an objet d’art to be revered apart from its function, well, that suits me perfectly.

The camera body is mahogany; the rails are made of cherry wood as was typical of most view cameras in the early 20th century. Many are stained and finished to enhance the wood grain, but this series has a heavy dark stain, almost a paint, that obscures most of the grain. The “D” in the name means “dark finish” for the color and it should look almost purple-red in the photograph. There are full-length extension rails for both front and back—the front folds up so the camera can fit in its case, while the back rail detaches completely. All the hardware is brass. My legacy camera is 8×10, like this one, though the bellows is red rather than black.

Eventually replaced by an all-metal camera, the D2 was manufactured between 1921 and 1950. It originally sold for $46.50, and this one, mine now, existed before I was born. It was probably acquired in the early ’60s as a used camera by the owner before me—I’ve been told he was ridiculed for getting a wooden camera when he could have an all-metal one—and, quite frugal, he certainly never would have invested in something new.

I’m sorry I never had the chance to meet him. He was said to be friendly, a voracious reader, a great humorist and, not surprisingly, everybody liked him. I’ve seen his work, though; I understand his passions, and I’m both honored and delighted to be the keeper of his cameras. Let’s see where they’ll take me.

Finding my writer’s voice
Next Post:“Finish” isn’t a word in an artist’s dictionary