Do creative artists have to be crazy?

Are creative people and artists more prone to depression, substance abuse and plain old being crazy than anyone else? Not really, though you might think so from tabloid ‘news’ reports. But we do see things differently. Some live on the edge and beyond. Is it all worth it?

Do you know “The Yellow Wallpaper,” the 1892 story by Charlotte Perkins Gilman? Reading it makes me feel I exist on a couple of intertwining levels, neither dominating. It’s both an extremely well-crafted piece of writing and a compelling story from the opening paragraphs. It makes me long to know what happens to her – not just the final result, but all along the way.

Despite several early references to death and ghosts in the first few pages, I’m still not a hundred percent certain that the story ends in death of the body; it certainly is about an ending. It may be that this is simply a portrait of a slipping connection between the woman and the so-called real world, the end to a normal, expected kind of life.

There are quite a few references – again, mostly early on – to creativity and imagination. The woman expresses herself by writing, if she’s not specifically any other kind of artist. Her journey towards madness is a fascinating one to watch, in that train-wreck sort of mentality, though her destination is uncertain.

She doesn’t seem to be depressed in her isolation. At first. A near-prisoner, her behavior seems justifiably manic. As her narrative-journal goes on, the signs of depression become more pronounced: withdrawal, mood swings, over-sleeping, paranoia, hallucinations.

As a reader, I was drawn to her right away, and identified with her flights of fancy or confusion or whatever trip she was on. Is she actually mad? Insane? Or is she a woman with a strong imagination trapped in a traditional life of convention, of pressure to conform? That’s an effective way to suppress creativity, as I can attest, hallelujah sister, amen! Certainly the connection between artists or creatives and madness – or depression – is one that comes all too close to me.

I don’t believe that artists must be crazy in order to create. Nor do I believe that a writer or painter who churns out a large-quantity body of work by adhering to a rigidly controlled production schedule is necessarily an artist. I choose to believe that a middle ground exists. Full disclosure forces me to concede I have yet to find my own way there for any sustained length of time.

The list of artists gone spectacularly mad would fill the tabloids. Perhaps it’s that precarious balance between living in “reality” and viewing the world through the unique filters that allow, or demand, reinterpretation of it for an often-uncomprehending public. I don’t think there are many artists, at any level, who don’t occasionally struggle with a sense of unworthiness, wondering whether they can do the material justice, ready to give it all up, no matter what their medium.

Among the truly talented – the once-in-a-generation artists – I doubt there’s one who isn’t somewhat afraid of the gift. Fear of not being able to live up to the immense talent they’ve been given can paralyze or destroy the fragile human beings selected to house it. 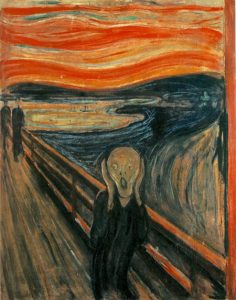 The ultimate price is often death – death of the body or a living death of madness, self-destruction, or dreams unfulfilled. Are they driven crazy? Or do they drive themselves towards a living kind of self-destruction? Caravaggio, probably. Mario Lanza, certainly. Emily Dickinson in her isolation might have been merely unconventional. Virginia Woolf suffered in her own room, in her own mind, as did a roster of between-war-era poets, those, not without reason.

The cost exacted for survival is often depression, which suits so well, with its inward-pulling cloak as a way to hide from an out-of-sync world.

Among these escapees was the 16th-century poet Edward de Vere. His diary (or journal or blog) published as Shakespeare’s sonnets and his autobiography (written for the stage, called Hamlet) show him teetering on the edge of depression. Both Prospero and Leontes, characters from the last great plays, have a more-than-casual acquaintance with depression and darkness.

Another who knows, Don McCullin, once said: “I don’t believe you can see what’s beyond the edge unless you put your head over it; I’ve many times been right up to the precipice, not even a foot or an inch away. That’s the only place to be if you’re going to see and show what suffering really means.”

When McCullin stopped working as a war-zone photojournalist, he retired to the countryside to shoot still lifes in his back yard – but his subjects were dying flowers and dead birds. It was all he knew. I saw a show of his work, a huge retrospective at The Barbican, overpowering in both insight and despair. Like other artists, the price he paid for the masterful, courageous work he gave us has been immense.

With all that darkness looming, would I choose to pay that price if I knew it would buy such a legacy? That is the question.

Am I now, or have I ever been?
Next Post:Finding my writer’s voice