Today I got my first look at the beautiful beach – la playa hermosa de Atlántida – when I took a bus to visit the town where I’ll be living, starting mid-May. First I had to figure out how to get to the bus terminal in Montevideo. Then figure out how to purchase a ticket. Then worry about whether I’d get off at the right place, never having been here before. But I did.

My very first view was the Rotary Club International sign along a highway, the ruta interbalnearia, in a flat, near-desolate looking place. My new friends, Syd and Gundy, drove me around and showed me the town.

That’s the Río de la Plata in the photos, even though it may look like the ocean. The transition from the river to the Atlantic Ocean extends all along the Uruguayan coast from Montevideo to Punta del Este, about 130 kilometres from the capital city. There, as it moves beyond the point, the river becomes the ocean.

The name probably comes from the silver-like sheen the surface of the water takes on when the sun hits it in a particular way. Generally the water is brown, from the agitation of the sandy bottom in a storm. Or so I’ve been told. 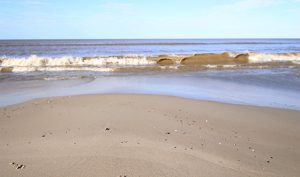 Other days, it’s quite blue, and some days it’s both – where the color changes shows the sand bars or different depths just offshore.

This beach. Life is good, especially during the off season. I’m told Atlántida is crazy in the summer with all the tourists.

Previous Post:Estoy aprendiendo español
Next Post:Finding a bookstore makes me feel at home