The prevailing attitude here is “Tranquilo!” I thought it would take me a while to let go of the amped-up SoCal state of mind, the always-on, always-responsible sensibility that had controlled my life for so long. But I’m shedding that much, much faster than expected.

I’ve been here 3 days and it’s gorgeous. Already I’m sleeping 8 hours a night, not to recover from travel exhaustion but because I’m getting rid of the stress that had become normal for me. Getting ready to leave San Diego, that last mile of the marathon of planning and taking action was the hardest, but 24 hours before getting on that plane, everything looked good.

My host family is rambunctious, as you might expect with 4 generations under one roof, plus una gatita y una perra loca! They’re also lovely and warm and willing to slow down just a bit when talking to me, so that some conversation is actually possible, jeje. I’ll get there.

Mi familia gave me a welcome parrilla yesterday, with traditional Uruguayan fare roasted over wood coals in the parrilla built in to the patio. The same word covers the oven/grill itself as well as the event and as part of the culture, it’s easy to find restaurants large and small that specialize. 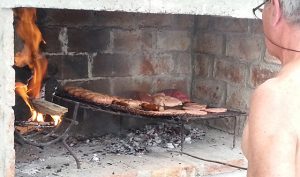 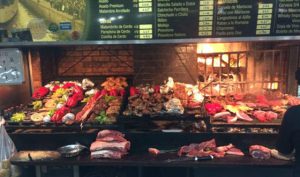 Beef, chicken, sausage – colita de cuadril, pollo, chorizo, pizza, hamburguesas, morrón (the word here for red bell peppers, not “brown” – that’s marrón, and not “pepinos”) and the pizza was simply taken out of the box and put on the grill with everything else. The chicken and beef got doses of mojito towards the end of the cooking, oil and spices, though like much Uruguayan fare, the spices are quite mild. All was served with salad and a big welcome.

Afterwards, I gave the family a copy of my first book. Writers and other artists are held in esteem in Uruguay, so it was a big hit.

Feeling awfully glad I planned and worked so very hard to take advantage of this opportunity. Second chances don’t always come around and I didn’t want to miss this one. Also happy that my kindle lets me switch between Spanish and English keyboards when posting, so autocorrect doesn’t go insane!

First view of Montevideo
Next Post:Business as usual, Uruguay style