What you know and who you are

Write what you know, they say. We always answer back: But what about this one, or that one who didn’t exactly know, if you know what I mean—I mean, what about In Cold Blood by Truman Capote? How about

Philip K. Dick, whose classic novel was made into a film called Blade Runner?

Peter Robb wrote a detailed biography of someone he’d never met, based on almost no information about his subject’s life. He changed his name as often as he changed living quarters. Little information—except for the work he left us. 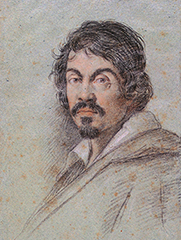 The man once called Michelangelo Merisi painted religious and biblical subjects modeled on his friends from the back streets of Rome, the prostitutes and thugs standing in for saintly figures.

But Caravaggio was a genius who changed painting forever because he painted honestly and created art from his core. Skirting the edge of the law, sometimes enmeshed in it, he lived, bowing down to authority when he needed money but otherwise thumbing his nose at a society whose boundaries he both ignored and transformed.

In the picture Robb draws, the DNA trail is unmistakable; Caravaggio’s attitudes toward his friends as well as his enemies are there for us to see in one painting after another after another. His eyes show us his world as he saw it, his revealing fingerprints all over his work.

Your fingerprints are all over your writing. You can write about characters and situations and settings that are entirely divorced from your own experience, but you will still write yourself into it… your skin is in the game, from the moment you begin.  — Katie Kitamura

Eighteen hundred kilometers away lived a kindred rebellious spirit and a genius in another medium who also had a bit of an issue with names (as in “what’s in a”). Almost an exact contemporary of Caravaggio, Edward de Vere left us his early poetry and some letters, but we have little work from the rest of his life. Or at least nothing under that name.

He wrote what he saw and knew and experienced, his entire life chronicled in the plays and poems that survive. Exceptionally well-educated and destined for the law—matriculating at the then-rowdy Gray’s Inn—De Vere was familiar with the convoluted details of Hales v. Petit, the legal argument reflected and refracted in an exchange at the opening of Act V in Hamlet, between the First Gravedigger and Second Gravedigger. This section is generally cut from modern performances because it seems incomprehensible—until we know the context. At the time, the written reports of this legal case were available only in old French.

The seventeenth Earl of Oxford, De Vere, traveled throughout Italy and peppered many of his great plays with names and characteristics of people he met, places he saw, dialects he heard; weaving in details of festivals, modes of transportation, political situations, and customs unique to Venice, Messina and Naples in 1575.

He was an intimate of one of the greatest courts of the Renaissance and his word-portraits of Dudley, Burghley, and even Elizabeth show up in his plays. The queen was a supporter, but he tried her patience with his brooding brawling personality, often resulting in lawsuits and once, in murder charges. Flawed as a man? yes. But never bland. Rich and deep and complex enough to have added immeasurably to our language and the understanding of our souls.

Any artist’s best work is personal, no matter the medium; not so much in the ostensible subject matter, but in the details.

Whether I specifically write of what I know or not, my soul is represented, even captured, in my writings. The writer in amber. Whether I intend it or not, my choice of subject, my approach to it, the words I put in, the words I leave out, all stamp any work I make as mine. The more I write, the more obvious—and unavoidable— it becomes.

What does my work say about me? Aside from there being not enough of it and what there is, incomplete? Some subjects keep demanding attention. Get it right. Make it work. Explore this in depth. Change the medium, not the message. I need to write about what I know but only as a starting point. What I really  need to write about is what I want to know. And that means about what intrigues me, and that means the creative process. I’m curious about how it works. I’m fascinated by it.

My first book was all about that, disguised as photography. As I wrote, though, I could sense the shift toward a clearer theme. The second book, unfinished, ten times more complex, is definitely about both the art and craft that contribute to the process. The Homer play, barely begun; and there’s still another play that hasn’t yet coalesced out of primordial soup, about an imagined meeting under Italian skies between those bad boys, Caravaggio and De Vere.

What does all this mean for me? What do I know now that I didn’t know before? And where do I go from here?

The art of delay, or procrastination as a means to an end
Next Post:Question everything: art, words and form